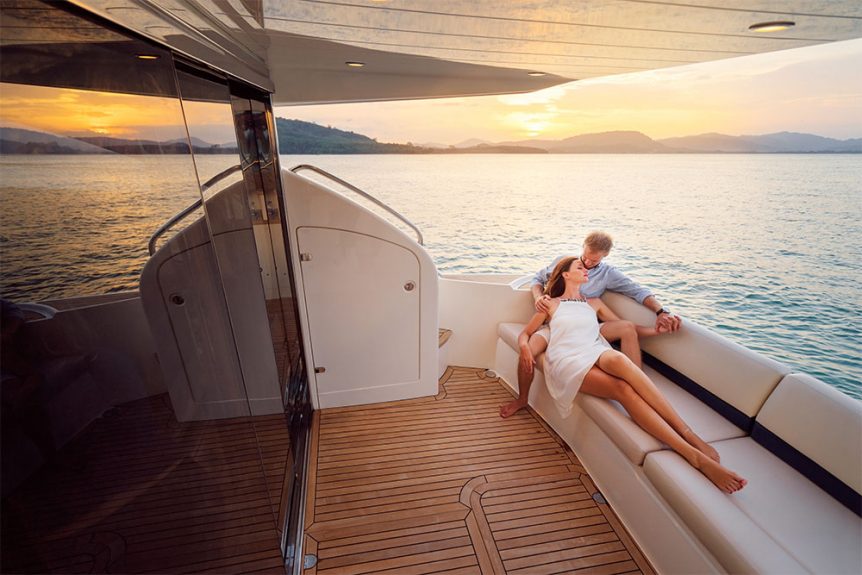 What would you do if you had more money than you could spend? I mean, what if you hit every financial goal and then some? Would you stop working? Get lazy? Relax? Buy a yacht? Travel the world? I don’t ask this question to be facetious. I ask it in a serious way with a deeply embedded lesson. I think that so many people are working so hard these days so that they can hit some financial goal. But then what happens when you get there?

There’s another goal that springs up, isn’t there? Then another one. Then another. But what if there were no more goals. What would you do? You always hear about these people who just sold their companies and they go off on a vacation for 3 months to sit around on a sugary-white-sanded beach. Then you know what happens? They get bored. They get that itch that needs to be scratched. And they head back home to launch another business.

The truth is that it doesn’t matter how much money you have in the bank or what goals you hit, there will always be more. Always. That’s just how we’re programmed to be. It’s in our very nature. Part of our design. We’re a race that’s meant to thrive, not just survive. When you’re in survival mode, that’s one thing. But when you’re thriving, you just want to keep pushing the proverbial boundaries. And why not?

I bring this up today because I was thinking of something very important. I was thinking about how, for most of us, it’s just never enough. We never have enough time or money or friends or opportunities or anything else for that matter. Never. We’re always pressed for time, running from place to place. And when bad things do happen, we focus so heavily on them that we forget about all the good things going on in our lives.

Makes you stop to think, doesn’t it? It makes you wonder how, for so many of us, we just fail to be present or to be grateful for what we have. Instead, we charge forward tirelessly and we forget about the people and things in life that truly matter. Now, I’m not saying that money is bad. In fact, I think that money is good. And greed is good (echoing Gordon Gecko here), but not at the expense of other things in life.

Life Is Short So Live It

Every time you make a decision, you send a powerful message to your brain. If you make your decisions based off of scarcity, you’ll live a life where you’ll never feel like you have enough. Instead, you have to send the right intentions to your brain. Be generous. Give to others. Spend money on experiences. Live your life. Because, you know what? It’s short. In a moment, it could be gone. Vanished forever.

If you feel like you’re running on fumes, make a change. If you don’t like something in your life, change it. Instead of living and working to help someone else fulfill their dreams, design your life in a way that you’ll have the freedom and security you’ve always wanted. To earn that, you might need to make some sacrifices. But not by working hard for someone else. You can only get so far by doing that.

The truth is that you have to work for yourself. Even if it’s just a side hustle in the beginning. You have to start somewhere. When you work for someone else, you’re just making them rich. Not yourself. Sure, if you get some stock options and strike gold, you’ll be okay. But where’s the surety in that? I mean, if you’re going to roll the dice on a startup, why not have it be your own business? That way, you own it. You get to call the shots. You get all the freedom.

Look, money isn’t everything. Ask anyone who’s super rich and they’ll tel you the same thing. It’s about quality of life. That’s what counts. It’s about freedom of time and money and location. Spend time with the people you love and cherish. To have the freedom to do that is what’s important. Not all the other stuff. Everything else is temporary. This life is temporary. But there are some things that are eternal. Love is one of the those things.

Your Intentions Are Everything

At home, I have this whiteboard on the wall. On it, I jot down my thoughts and sometimes circle my goals big. Just to remind myself. The funny thing about doing that is you begin to focus on it. Whatever you focus on, you move towards. So if you want to start a business or lose weight or just make a bit of extra money, focus on that intention. You can do that by writing your thoughts on a whiteboard or a big sheet of paper and hanging that in front of your eyes.

Something happens internally when you focus on your intentions. You begin to move towards what you desire. The subconscious has a strange way of helping you to do that. I know it might sound crazy to some people. But some people get what I’m saying. Do you? Whether you believe it or not, it’s true. Intentions are everything. Everything. Place your intentions somewhere in front of you and focus on that consistently.

The best way to do this is to spend the first fifteen minutes of your day focusing on that intention. Just look at your goal and close your eyes and focus on it. Envision it. Imagine it’s already come to pass. What does that feel like? That’s the key here. That’s what’s important. Focus is everything. Before you open any screens or do anything else, literally just focus. 15 minutes. That’s all. And don’t just do it in the morning. Do it at night before you go to bed.

Your goal? Make your intentions the first thing you think about in the morning and the last thing you think about at night. Once you start doing that consistently, you’ll begin moving towards it. It’s impossible not to. If you want to lose weight, place your dream body on the wall in front of you and focus on it in the morning and at night. Believe me, this stuff works. Not at first. But over time, it does.

If you’re looking to buy a car or a house or a plane for that matter, put a picture of it in front of you and focus on that intention. If you’re looking for the perfect relationship, find that person, and place him or her on the wall in front of you. Write down all the character traits that you’re after next to it and focus on that intention. It takes time. You have to consistently to do this for some time both day and night. But you eventually start moving towards it. And it eventually materializes into your life.

What time do you wake up in the morning? I feel like I have so much going on, but I still manage to get a lot done. You want to know how I do that? I do it by waking up early. No, not 5am. Not 4am. I’m talking about 3am. Want to know the crazy thing? I don’t even set an alarm. It’s like my internal clock just goes off at that time and I’m up with full energy. It’s been that way for a long time. A very long time. And at this point, it’s habitual.

The reason why I bring this up is because I was talking to a friend the other day who was asking me about how they have no time. They have no time to achieve their goals because they’re so busy with other so-called stuff. So I drilled into a bit. I asked him what was taking up so much of his time. His answer? Work. Social life. Relationship. Errands. And so on. And then I thought about something that Russell Brunson said at some point. He said that you have to fire yourself from nearly every job you do.

You see, the truth is that we all have the same amount of time. But it’s how we use that time that’s important. You have to focus it on the areas that count. It’s not enough to work hard and work smart and to focus your intentions on what you want. But you have to wake up early and properly manage your time. If you’re immersed in bad habits, then you don’t want success badly enough. Whatever success means to you, if you’re repelling it instead of moving towards it, something is wrong.

So wake up early. Not 3am. Maybe not even 4am. But what about 5am? All you need is one hour per day to work on your dreams. That hour turns into more. It builds momentum. Over time, you begin doing more and more as your project takes shape. I’ve been thinking a lot about this as I’ve been building Kribbz with Kent Clothier and Howard Panes. Watching this project come to life has been so awe-inspiring. But so much has happened that has lead me here.

But you know what? That’s okay. You have to take the bad with the good. You can’t expect sunshine and rainbows every day. It’s going to rain sometimes. And it might just storm other times. But you know what else? Life isn’t about waiting for the storm to pass, it’s about learning how to dance in the rain. That’s it. Plain and simple. Embrace whatever has happened to you and use it to fuel you, not hinder you. Push forward and break through obstacles.

Get outside your comfort zone. Do shit that makes you uncomfortable. Go meet someone new. Talk to a stranger. Say I’m sorry to someone. Or just go out there and look at the world as a child does with wild-eyed wonder. This life is too short to squabble and be swallowed by your problems. You’re always going to have problems. It’s just a sign of life. And you know what? The more money you have, the more problems you’ll have.

So embrace it. Embrace all of it. In fact, beckon it. Move towards it. It’s you. Your life. Your story. Live it. Don’t let anyone make you feel bad for anything that’s happened in the past. It’s what made you who you are. Whatever your race or religion or color of your skin or gender, embrace it. Accept yourself for who you are. And as my good friend, Kamal Ravikant says, Love Yourself Like Your Life Depends On It.