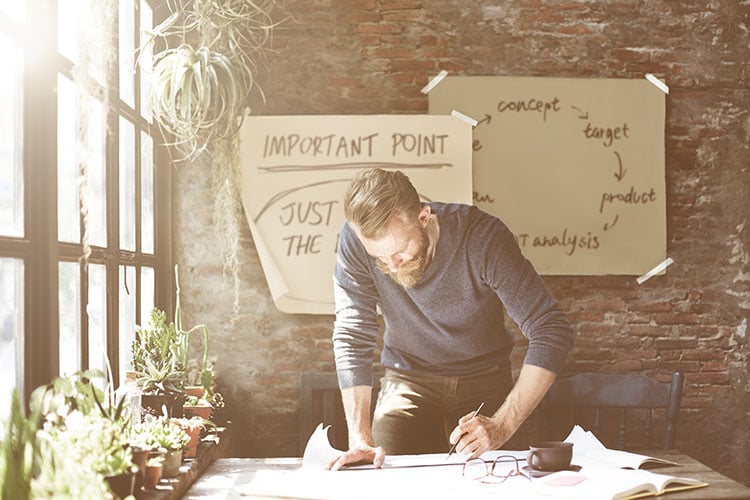 One of the fabled sayings that resonates most with me comes from Henry Ford. He says that if you think you can or you can’t, you’re right. To me, it speaks volumes. Most of us fail before we even start towards a goal because we lack the belief in ourselves. If you don’t believe you can achieve something, how can you expect to follow through with it?

I’m not saying that belief is all you need. But if you don’t start with belief, you’ll go nowhere fast.  We can all get intimidated by the enormity of a goal. We can look at it in awe. At the outset, it feels so enormous. Not knowing where to begin is often the thought that crosses our minds. Yet there is true power in our thoughts. Those very thoughts can either empower us or defeat us before we even get started.

Years ago, when one of my businesses failed dramatically, I remember something my mom said to me. She asked me why I couldn’t just go and get a 9-to-5 job. Well, to me, that was the ultimate failure. I knew I couldn’t give up. I knew that I had to find a way no matter what it took to get me there.

But the difference between someone who caves and accepts the hand they think that fate dealt them, and someone else who doesn’t, is entirely about beliefs. If you think you can or you can’t, you’re right. That’s all about your beliefs. If you believe you can achieve something, the only thing separating you from that goal is time. That’s it.

Sure. There are other things involved in achieving or attaining success in some endeavor. But that’s the heart of it. That’s the secret sauce. Because, when you believe in yourself wholeheartedly, nothing can stop you. It doesn’t matter what your present situation is, nothing can come between you and your dreams if you have the right beliefs.

How Henry Ford recovered from failure

I’ve talked about Henry Ford’s famous failure in the past. If you haven’t read that post, I’d suggest reading it. Because, while you might attribute the name Ford to success in the automotive industry, what you might not know about Ford was that he failed dramatically and miserably twice before succeeding on his third attempt.

When Ford was 28 years old, he began working for Thomas Edison’s company as an engineer. Two years later, at the age of 30-years old, he became chief engineer. That promotion enabled him with the means to pursue his personal passions. His obsession? Gasoline engines.

Ford worked tirelessly for the next 3 years on creating a self-propelled gasoline-powered engine. He called it the Ford Quadricycle. Edison, who later saw the design, approved of Ford’s relentless pursuits to create a gasoline-powered vehicle. With Edison’s blessings, Ford’s determination was reinvigorated. Two years later, at the age of 35-years old, he had produced his second prototype.

Along the way, Ford happened to meet a successful lumber baron by the name of William H. Murphy. With his financial backing, Ford left the Edison Company to form his own venture. He called it the Detroit Automobile Company, which he formed one year later at the age of 36-years old.

Production began but Ford faced a series of setbacks and defeats. Ultimately, the quality simply wasn’t there in the production. And the price to actually produce those automobiles were misaligned with Ford’s intentions. The company went bankrupt and shuttered its doors two years later. Ford was 38-years old at the time.

However, that same year, 10 months later, Ford successfully designed and produced a new automobile with the help of C. Harold Willis. It was a 26-horse-power automobile. Ford was ecstatic. And with the continued backing of lumber baron William H. Murphy, they formed a new company called the Henry Ford Company.

Ford was named the chief engineer in the second company. But Murphy had other plans. Not wanting to fail again, Murphy brought in a man named Henry M. Lealand. He was a consultant who would help the business get off the ground. Unfortunately, due to their differences and not seeing eye-to-eye, Ford left the company, which was later renamed the Cadillac Automobile Company.

How would most people feel after two failures? Do you think Ford wasn’t dismayed? Do you think he was still as eager as he was on his first attempt? If you can imagine how Ford might have been feeling for a moment, you might get a sense of the defeat and despair he was walking through.

Keep in mind that Ford was married at the age of 25-years old. Not only did he have a wife, but he also had a son to support. Can you imagine failing and going bankrupt in business twice by the age of 38-years old? Obviously, we all know the end of the story. But put yourself, mentally, where Ford might have been. He was a failure in every sense of the word. But he didn’t give up.

One year later, he met up with a coal dealer from Detroit named, Alexander Y. Malcomson. The two formed a partnership they called the Ford & Malcomson Ltd. to design and produce inexpensive automobiles that everyone could afford. The beginning was tough and slow-going. They nearly failed to produce payment for their first shipment of parts that came from the Dodge brothers.

However, Malcomson was shrewd and a clever businessman. He somehow convinced the Dodge brothers to hold off on their payment and was able to secure a group of investors to come in with some much-needed capital. Afterwards, Ford produced a race car that became known around the world after it set a new land-speed record of 91.3 miles per hour. The driver, Barney Oldfield, took the car around the United States and named it the Ford Model 999, after the fastest train of the time.

Ford’s name became synonymous with the automotive industry and he got to work on his dream car. A car that would be inexpensive and affordable by working class folks in the United States. This is very much like Elon Musk’s quest today to make the Model 3, which is an affordable mass-production electric vehicle.

However, it wasn’t until 7 years later that the Model T first came off the assembly line. Ford was 45-years old at the time. Consider for a moment that this is now 20 years into Ford’s automotive desires and many failures later. Can you see how the statement, if you think you can or you can’t, you’re right, is an accurate statement? Especially coming form Ford, this is powerful.

I relayed that story so that you can understand that you’re likely going to face some failure on your way towards your goals. And that’s normal. Failure is a stepping stone. It’s not a sign of total and complete defeat. The only way you can be completed defeated is if you give up entirely.

How to believe in yourself

Even if you’ve failed many times, it’s not the end of the road. Imagine what Henry Ford was going through. Think about what he said. If you think you can or you can’t, you’re right. Why? Because it’s all about your internal beliefs. If you can shift those, you can do anything. Because, in this reality that we call life, nothing is more real than the thoughts that produce our present and future circumstances.

Bruce Lee once said, “As you think, so shall you become.” Proverbs 4:23 also says “Be careful how you think; your life is shaped by your thoughts.” Norman Vincent Peale said, “Change your thoughts and you change your world.” Buddha said, “We are shaped by our thoughts. We become what we think. When the mind is pure, joy follows like a shadow that never leaves.”

I could quite literally go on and on. There’s a reason why some of the most influential people in history have said that our thoughts (and beliefs) create our present-day realities. That’s also the reason why Henry Ford said that “If you think you can or you can’t, you’re right.” They’re all saying the same thing. All of them.

So how do you go about believing in yourself? Belief is simple. It’s habitual. The thoughts you think on a daily basis create emotions, which in turn beckon your actions. So if you’re used to thinking negatively, everything in your life is going to be based on that platform of negativity. Instead, if you focus on positivity, good things will follow.

It all boils down to the language you use on a daily basis. Change it. If it’s causing you to be stressed out, shift your language and you will shift your reality. Simple as that. It’s not as complex as most make it out to seem. It’s all habitual. Say something over and over again with enough emotion behind it and it will eventually become your reality. Period.