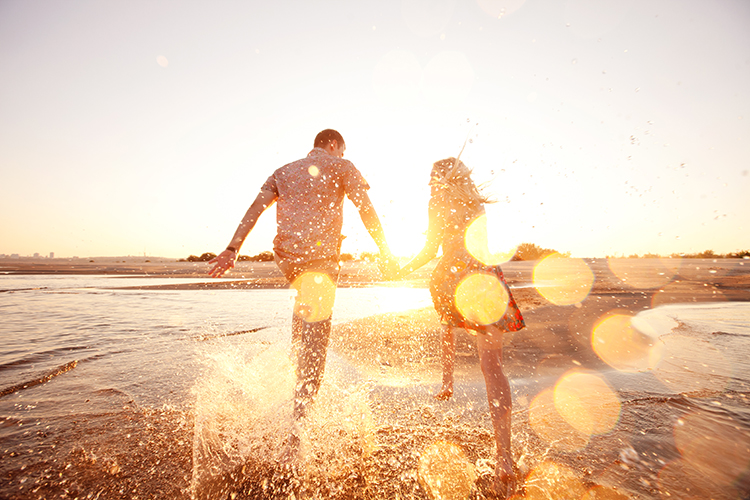 We all just want to be happy in life, don’t we? That’s why we do the things that we do, isn’t it? Yet, at the end of the day, we just don’t seem fulfilled. While we might eventually attain the things we desired, there’s always something better, shiner, and more improved just around the corner.

Everything that we say, do, or think, revolves around the perceived notion of achieving greater happiness. We want a nicer car because we think it will make us happier. A bigger house because we’ll be happier by having more room to spread out. The perfect spouse or significant other because they will make us happy. And, of course, a better job or more income because that will surely equate to more happiness.

Yet, once we have those things, we don’t seem to be all that much happier. In fact, the happiness is fleeting at best. It might last for a little while, but it ultimately fades.

Things will not make us happier. While buying that shiny new object will instill some level of happiness, there’s always something better around the corner.

In a study conducted by Brickman, Coates, and Janoff-Bulman entititled, “Lottery Winner and Accident Victims: Is Happiness Relative?” this team of researchers concluded that while certain life events influenced happiness for a brief period, happiness levels stabilized over time.

In effect, the lottery winners were not that much happier than control subjects over time, and paraplegics were not much less happier than others over time. Each of the individuals had a baseline level of happiness that they ultimately returned to after whatever life-altering event affected them.

So, the question then remains, “How can we be happier in life?” How do we boost our Hedonic Set Point so that we gain happiness from life’s simpler pleasures? How can we cherish the moment and be present rather than brooding over the past or simply hoping for something to occur in the future?

5 Principles for Living a Happier Life

Happiness isn’t impossible. We can all be happier in life right now, in this very moment, if we chose to be.

The biggest thing that we need to keep in mind is that our presence here is only temporary. Tomorrow, the next day, or some years from now, tragedy might strike and we might find ourselves in a far worse situation, or no longer here on earth.

When that time comes, we’ll appreciate what we had in the here-and-now. Don’t allow that to happen to you. Appreciate it now. Be happy now. And by living your life in accordance with the following 5 principles, you’ll find yourself happier today, not just wishing for it tomorrow.

Principle #1 – Be Grateful for Everything, Even for Your Problems

One of the biggest complaints that people have in life, and one that keeps them from being happier, are the problems that seem to be ever-present. Yet, there will always be problems in life. Rarely will we live a life that is entirely problem-free.

Tony Robbins once said that “Problems are a sign of life.” You will always have problems and there will always be something that you’re battling against. In fact, the quality of your problems will increase over time. But we will never actually be rid of all of our problems, because there’ll always be another one around the bend.

The ultimate way to battle against our problems lies within our focus, not in the problems themselves. The mind is like a great camera lens — that which we choose to focus on, we’ll get more of. Focus on the problems, and they become bigger and brighter. But, focus on the good things that we have to be grateful for, and the problems will fade into the distance.

This isn’t to say that you can completely ignore all of your problems. No, it’s just the contrary. You should certainly deal with your problems, but don’t allow them to consume you. Take the time to appreciate the problems. In fact, be grateful for them. Those same problems might be the source for something incredible in your life in the future.

Even if the problems might seem catastrophic today, tomorrow, they might help to reveal something that serves the greater good. And, when the mind shifts from a state of lack to a state of abundance, tremendous things begin to occur. When we’re grateful for what we have, no matter how small that might be, our happiness levels increase.

Do this every morning without fail and it will turn into a habit. The habit of gratitude is a powerful one, and one that can lead to a happier and even healthier life.

Principle #2 – Don’t Be Judgmental or Critical of Others, You’ve No Idea About Their Journey

Judging and criticizing others runs in our DNA. Often, we can’t help it. We judge and criticize everything, sometimes without even knowing it. The human mind has upwards of 60,000 thoughts per day, much of which occur in the subconscious mind, and a lot of that thought is negative.

Yet, when we judge and criticize others, it usually stems from feelings of inadequacy, jealousy, or fear. While not true in all cases, judging and criticizing won’t serve us. Simply put, we have no idea of others’ journeys, even if they are close to us, so we shouldn’t be so judgmental.

Judging and criticizing also limits our personal happiness levels. If you find yourself being judgmental of others, ask yourself what you would do in their shoes. How do you feel when others judge and criticize you? Of course, it never feels good to be judged, so we should be more conscious of it with others.

I once heard a story about a man who was riding the subway in New York City. As he sat there, a father, who had three children with him that were out of control, was just zoned out and ignoring them. His small children were misbehaving, being loud, and annoying other passengers on the subway car.

The man wanted to say something several times to the father, and he could see the other passengers rolling their eyes and casting nasty scowls at him. But, the father did nothing. Eventually, the man got up before he was about to exit the subway car at his stop and made a comment to the father.

He said “You should really do something about your kids, they’re out of control.” He said it in the nicest manner that he possibly could. The father looked back at him, almost as if he was snapping out of some spell, and replied, “Oh, yeah. I guess I should. We just got back from the hospital. Their mother died from cancer and I don’t think they know how to handle it.”

The man was shocked. He had no idea. And he profusely apologized to the father, offering his condolences and help. The other onlookers who overheard the conversation suddenly melted from scowls to frowns. He had just made a huge mistake.

We have no idea what others are going through — we’ve no idea of their journeys. We shouldn’t judge or criticize them whatsoever. The negative energy that comes along with it doesn’t serve us, it just makes us less happy.

Principle #3 – When You Find Yourself Complaining, Look for a Silver Lining in the Situation

We all complain. If we don’t do it vocally, we certainly do it in our minds. Our complaints stem from our frustrations — whether it’s a frustration of our present situations, or a frustration with others, we find ourselves complaining quite often.

The problem with complaining is that it shifts our focus to a state of lack. When we complain, we feel that we’re lacking something, or that our present situation is far from the ideal that we’ve set in our minds. This only helps to reduce our level of happiness.

Try to appreciate whatever it is that you’re complaining about. I know that in my life, I’ve certainly been faced with some pretty bad situations. But, rather than complaining about it, I found ways to use those situations to fuel me, learning from them, and using them to improve my life.

It’s hard to find the silver lining all the time. Sometimes, really bad things happen to us, and we’re absolutely unable to find anything good about it. But, usually, over time, our perspective changes. There is always a way to make some good out of a bad situation, no matter what it is.

I know, I know… it sounds silly, doesn’t it. Sure, we should smile like nothing is wrong. But, smiling, which is a physical manipulation of the fascial muscles, actually causes a direct emotional response. Smiling makes you happier, plain and simple.

In a study conducted in 1988 by researchers Strack, Martin, and Stepper, the participants held pencils in their mouths to manipulate their facial muscles. Some were told to hold the pencils in their lips, others in their teeth, while they watched a cartoon.

Holding a pencil in your teeth forces a Duchenne smile, a genuine smile that alters the muscles near the eyes. Those participants found more humor in the material presented, reinforcing the notion of “motion creates emotion.”

Similarly, if I were to ask you to describe a depressed person, what would you say? Would they be hunched over or standing straight up? Would they be smiling or frowning? Of course, they would be as close to the fetal position as possible, while still trying to function as a normal human being.

However, if you were to alter the physiology of that person — if they were to stand up straight and smile a Duchenne smile, look in the mirror, and do this for 20 minutes each day, remarkable things would occur. Give it a try and you’ll see just how effective it is to alter your physiology to affect your emotional state.

Principle #5 – Find a Way to Contribute Something, Anything, to Others Every Single Day

If you truly want to be happier in life, then find a way to contribute something, anything, to someone every single day. While this might sound strange, it’s completely logical. When you contribute, your mind moves from a state of lack to a state of abundance. You suddenly feel like you have more time or money.

Speaking of money, you don’t need to donate thousands of dollars. Donate your time. Go to a retirement home and volunteer some of your time. Or, go to a homeless shelter and help to feed the poor. Remarkable things happen when you contribute something of yourself to others.

Simply put, there are plenty of people out there who are living in a huge state of lack. While being grateful for what you have is one thing, actually doing something to contribute your time is an entire different thing. Find something that you can do to help others, and make it your mission to do so.