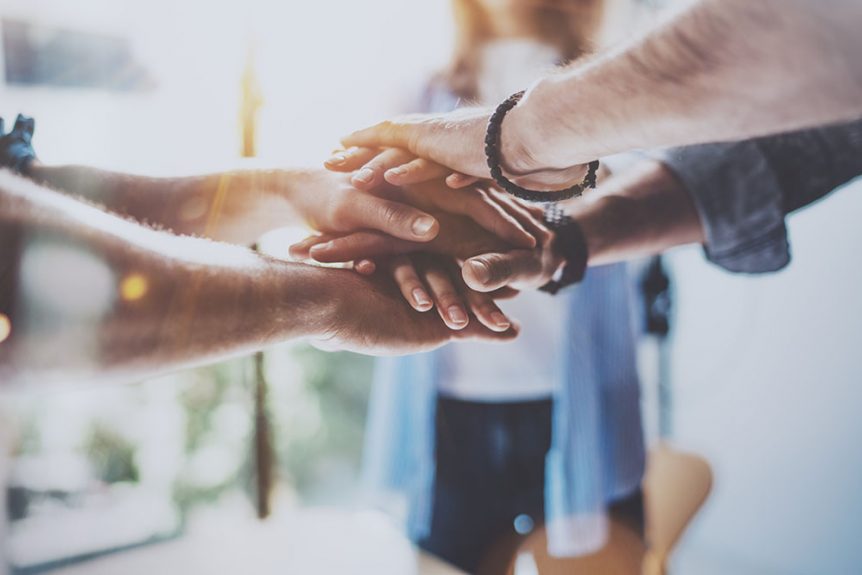 I wanted to talk to you today about something that I was never really good at in my life until not so long ago, and that’s partnering with others. As an entrepreneur we like to do everything by ourselves. We want to be the one who does it all. That’s a big problem, because you can’t always do it all.

One of the cool stories that I’ve shared with you is the story of Kribbz Kribbz is a real estate platform that we’re developing. It’s a real estate blockchain, and it’s pretty epic the way that it is. First of all, we’re building our own blockchain, which in and of itself is pretty hard. Because there’s not many blockchains out there. Most people fork off of the Bitcoin blockchain or the Ethereum. I wanted to build my own blockchain, and just finding somebody for that was just really difficult.

I think that this will be probably a revolutionary platform. It came about because I decided to partner with others. I’ve realized that I can’t really do everything on my own. The coolest thing though is, I partnered with people who are way more successful than me.

In the past, it seemed like I was always partnering with people who were way less successful than me. It was kind of like I was trying to bring them up to my level. Never have I been in business with these kinds of people. When I say these kinds of people, I mean like Howard Panes, and Kent Clothier and Roland Frasier. These are all like super, super successful marketers and entrepreneurs.

But none of that would’ve come about if I hadn’t decided to go network and help others, and add value – instead of – when everything collapsed, scrambling to find another thing to do, or trying to do that other business in a different way. Really, really cool things transpired. I’m grateful for it every single day that I wake up. I am filled with gratitude about it.

My point is that partnering with others is a really good thing, but you can’t partner with others if you don’t put yourself out there. Yesterday I spoke about affiliate marketing. Affiliate marketing is one way of partnering with people. When I talk about partnering, I mean like deeper, intensive partnerships. I’m talking about business partnerships. Affiliate partnerships are great, but they’re loose and you can kind of cut those ties anytime you want.
When you get out there and you try to find really, really intense people who are really successful in certain areas of business – and you partner with them, that’s where the real magic happens. You have to put yourself out there. If you don’t put yourself out there, you literally can’t do anything. There’s just like no way to be successful.

But if I hadn’t said, “Yes,” to going there, I wouldn’t have met a couple of other really inspiring entrepreneurs. One of them – his name is Afzal Kahn, from Khan Design in the UK. He’s probably one of the most famous car designers in the UK. He owns a company called Chelsea Truck Company. It’s huge. I mean they produce the most insane trucks. If you haven’t heard about them, look them up. Another person that I met is this guy Parham, and he has an Instagram f17one. He also had a McLaren P1 until not that long ago.

The cool thing was, I got to meet these people, because I was hanging around with Howie. I’m not sure what will come out of all those relationships, and it’s not like I had some intention of something coming out of those relationships. But the funny thing was – I was speaking with Parham recently, and we were talking about– He runs a company called LA Muscle.

I think it’s been around for like 2 decades. It’s won the most awards. He’s got the most advanced muscle builders and all this other stuff. We were talking about running a funnel. It was funny because, when I was with Russell in Boise, he was messaging me and saying, “Man, I think I’ve been convinced to use ClickFunnels.” I was like, “Cool.”

He had read, “Expert Secrets,” because I told him to go and buy it. He read it, and he tried to implement – he was like, after a few days he’s like, “Forget it man, I’m cancelling. This ClickFunnel’s thing is too hard.” I was like, “Too hard? It’s so easy.” But I guess when you come from more of a technical side, it is easier. We’ve been talking extensively about running one of his offers as a free plus shipping offer.

I’ve talked about the power of free before, and it’s just so powerful. Literally, like people bend over backwards to get stuff for free. Cool thing is like, you can get a lot of clients for free. I told him, “We should build a free plus shipping funnel for one of your products.” The cool thing is, he had everything already ready. He just doesn’t know that much about marketing.

Crazy that he’s built this massive company and just doesn’t know that much about marketing – well marketing in the terms of funnels and stuff like that. Not that he doesn’t know anything about marketing. But they don’t really advertise very much. I believe they just have built like a really big business over the years, and they just don’t need to advertise.

The crazy thing is, when you take this – when you take great products and you put them with the power of a funnel and you offer for free, some extraordinary things will happen. I’m just in the process of building this funnel, and so I will definitely report back and let you guys know how it goes.

My point is that if I had not put myself out there, and not gone to these things and met these people, I wouldn’t have opportunities like this. Not to say that I will generate millions of dollars from any given opportunity. If I do, that’s great. It’s just part of the journey – putting yourself out there, and just being open to partnering with other people. I used to never be open to partnering with people.

The truth is I still get probably 100 or more emails every single week about wanting to – me to write about somebody, or wanting to have a link posted somewhere. I can’t tell you how many people write to me and ask me to write an article about them in Forbes or Entrepreneur Magazine. It’s just like, “Dude, I’m not going to write about you.” Some of these cold approaches are just so ridiculous – you laugh. I read one sentence and I delete them.

I know when somebody’s approaching me with real value. I know that somebody is more sincere. It’s like you don’t approach somebody out of the blue and pitch them, it just doesn’t work. Don’t people get it? I just think people just don’t get it. Instead, you have to develop a relationship with people. If you want to partner with them, it’s not the most simple and straightforward thing. You have to develop a relationship with them. You have to deliver some value. You have to kind of prove your worth. If you don’t prove your worth, then it’s like – then it’s totally, totally wasted effort.

That’s the cool thing. If you put yourself out there, you could find people. You can find people to partner with. Even if you have an existing business and you feel like you’re crushing it, and you just want to go to that next level. You never know what will happen if you put yourself out there. I think a lot of us are too afraid sometimes to put ourselves out there, and we’re too closed off.

The interesting thing that I found is that the more money you make, the less susceptible you are to partnerships with people that you don’t know or trust, right? If you want to do business with people, you have to develop relationships with them. Especially if they’re successful people. You can’t be like – approach somebody out of the blue and be like, “Hey, I got this great business op–” Yeah, you could go on Shark Tank or something, sure.

The surest most absolute way that will work, is to first develop a relationship with that person. You prove your worth, you prove your value. Then partnerships evolve. You shouldn’t close yourself off to doing business with other people. In fact, you should be open to it. Even saying this now, I feel like I should be more open to some of the emails that I receive, some of the pictures that I receive. But not the ones that are just ridiculous.

My point is, you just have to be more open, and cool things will evolve. You just don’t know. Don’t expect to have all the answers, it’s part of the journey. If things don’t go your way, don’t call it quits. Just keep putting yourself out there. You don’t know what will happen. You literally do not know. Nobody has all the answers. You’re just going to have to go along on this journey of life, and just continue along – and you will find the right people.

It’s like part of the universe. I don’t know if you believe in God, but I believe wholeheartedly in God. I have really strong faith. I have faith in God that I will find the right people. That the right partnerships, opportunities, money that I need – anything will come to me. Whether you call that faith or the law of attraction, or the universal oneness that binds us all in this collective consciousness – to me, it’s all the same thing.

It’s God, it’s my faith in God. It’s like, if I don’t believe in that, then like what do I believe in? Even when things were so bad. Even when my business fell apart, maybe like 18 months ago now, or something. I remember telling a friend. I was like, “I don’t know why this happened to me, but I believe that there’s a reason. I believe God put me here in this situation for a reason, and I can’t lose my faith now.”

That’s what I have to tell you guys today. I hope that you got some value out of this. I know that it was less of a technical talk on marketing and business, but it’s just something that I’ve been thinking about and wanted to share with you guys. Please like, and share and comment and subscribe on iTunes. I greatly appreciate it, I read all the comments. Until next time, I will speak to you guys soon.