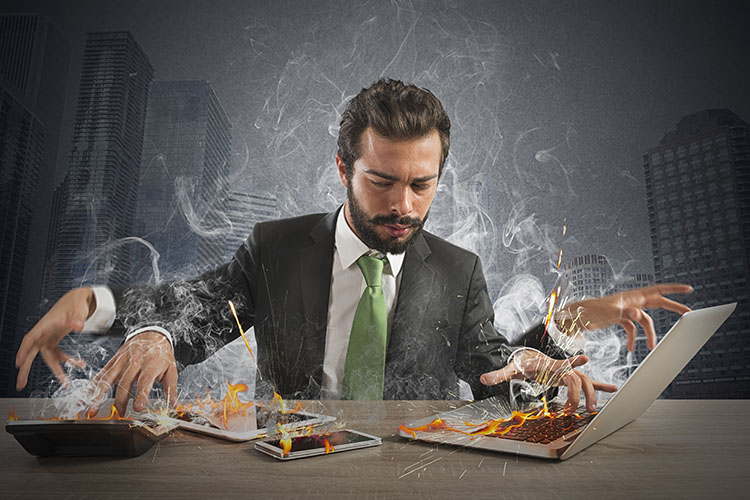 “The journey of a thousand miles begins with a single step.” — Lao Tzu

Sometimes I feel like giving up. I feel like waving my hands in the air and throwing in the proverbial towel. Like a fighter who’s been bruised and beat up, I wonder how much more of this I can take. My mind thinks about the gravity of work and the complexities of the efforts that lie ahead of me, and it becomes too much to bear.

When I stop to think about the alternatives of giving up on my goals and living a life of mediocrity, I simply can’t bear it. The pain of those thoughts push me to keep going. In my mind, there is no choice. However, in the past, I’ve definitely given up on things that I once thought I wanted wholeheartedly. I didn’t keep going. I simply stopped.

So what makes the difference? What’s that switch in the mind that will push you past your breaking point? What’s the driving force behind getting up even when you keep getting knocked down? How do you become a prized fighter who can overcome all odds to keep pushing and going even when it seemingly gets tougher and tougher to follow through?

For me, it’s my family. It’s the thought that if I don’t keep going, and I actually do quit and give up, that they wouldn’t get to enjoy the life that I know they deserve. I think about the alternatives to pure and ultimate success and it simply isn’t something that’s acceptable to me. I can’t bear those thoughts. Not for one moment.

I look into the eyes of my two little babies and my heart melts wanting a good life for them. To give them all they could ever hope for and want, but to also be around to teach them everything that I know. It’s not just about money. It’s about having the time to spend with them, to be there for all the precious moments in their lives. That’s what keeps me going.

Before you can accomplish anything great, you need to figure out why you want to achieve it. What drives you? Ask yourself that question. It doesn’t matter if you’ve failed at something in your life. I am the ultimate failure because I have failed at everything. But I also refused to give up. However, I’m not some exception to the rule.

The truth is that the most famous people in the world have failed the most times. But they didn’t stop. They didn’t give up. They might have paused for a very brief period, but they kept going. Yet, they all had something that kept them moving forward. They all developed something in their hearts and their minds that pushed and pulled them towards their goals.

What’s your reasons for wanting to achieve your goals? The most important thing about goal setting that you must understand is that if you don’t set your goals the right way, you’ll surely fail. The truth is that a large majority of people set their goals the wrong way and they often give up. This is especially true for people that attempt to set goals on New Year’s Eve. They almost always fail.

In fact, studies have confirmed that only 8% of people who set goals on New Year’s Eve actually end up following through and achieving them. Yes, only 8%. Think about some of the goals you’ve set on New Year’s and think back to how many of those you actually achieved. Just under half of all the people that set those kinds of goals even make it through the first month.

SMARTER goals are goals that are set the right way. They are specific and meaningful, they’re achievable and relevant, they’re time-based and evaluated goals that are constantly pushed towards and accomplished by re-adjusting your approach.

One of the most important steps in your goal-setting process, is that second part when you figure out what the goal means to you. Sure, it’s highly important to get specific and understand exactly what you’re going to accomplish and when, but you also need to understand why you want it so badly. What’s the meaning you associate with those goals?

Without a strong enough meaning to your goals, you’ll give up. You have to figure out why you want what you want. For example, for me it’s largely focused on my family. They mean the world to me. When I look into their eyes, I know why I work so hard to ensure they have a great life. What’s your reason?

I know that a lot of people think they can’t do what they love to do and make money while doing it. They feel like that’s some dream only to be lived by others in this world. But that’s not true. When you do what you love and you get paid for it, you don’t really feel like giving up. Even when you’re not paid that much.

It’s not some dream or fantasy. The people that love their work never actually give up. But if you’re not doing something you love, then it should be looked at as a stepping stone to get to where you want to be in life. Don’t settle for less than that. Love what you do and you’ll never work a day in your life.

You’ll feel like getting up early every single day because you’re so enthralled in that work and so engaged in what you’re doing. So you absolutely have to pursue what you love if you don’t want to quit and you want to be dedicated to pushing forward with whatever it is that you’re looking to achieve. Decide what that is and start making the transition towards it right now. Don’t wait another moment.

#3 — Think about what you’ve achieved in the past

Sometimes, when you feel like quitting, the best way to follow through and keep going is to think about what you’ve achieved in the past. What goals have you already accomplished? What milestones did you notch into your belt? When you thought it was near-impossible to succeed, how did you pull through and make it work?

The thing is that the human mind can achieve anything it can conceive. The biggest problem is that we have a hard time conceiving that we’ll achieve great things. But when we have a point of reference, it’s easier to do. When we can build up from small wins, we can create momentum.

You simply have to realize what you’re capable of. If you don’t think you’re capable of doing something, you won’t do it. You won’t follow through and keep going. You’ll quit and you’ll give up. Understand that it’s all a mind game. Use that as a point of reference and a platform for growth rather than something that holds you back.

#4 — Surround yourself with positive influencers

You’ve heard the saying that if you lie down with dogs, you’ll come up with flees. If you don’t surround yourself with positive influencers, then you’ll most definitely feel discouraged. The truth is that some people don’t want us to achieve our goals. They want us to be compliant and complacent and not to shatter through the status quo.

Why? It’s a reflection on themselves. If you achieve your goals of losing weight or making lots of money, or anything else for that matter, then where does that leave them? Maybe they’re just like you. Maybe they want those same goals but just haven’t had the courage to follow through. So they might want to see you fail because they couldn’t do it.

Only surround yourself with people that give you positive influences. Don’t allow negative people to tell you that you can’t achieve something. You can quite literally do anything that you put your mind to as long as you don’t stop and you don’t give up. As soon as you stop and give up, it’s all downhill from there.

I don’t care what it is, whether it’s alcohol or prescription drugs or fast foods or anything else for that matter, if you engage in toxic behavior, you can’t expect a positive outcome. For example, if you’re a heavy drinker and you wonder why you can never achieve your money goals, it shouldn’t be a surprise to you. Drinking destroys the system. So do prescription drugs, recreational drugs, over-indulgence in fast or fatty foods and so on.

If you don’t have the energy to achieve, how can you expect to follow through? How can you expect to keep going when all of these substances in your body deter you from doing just that? It’s nearly impossible. So avoid toxins like the plague. I know that it’s easier said than done. It’s a full lifestyle transformation. But if you’re serious about your goals, then it’s a must.

You can’t achieve your goals while feeling hung over all the time. Substances will do that to you. In turn, with a clean body, comes a clean mind. That mind will become laser-focused over time. After 6 months being toxin-free, you’ll wonder how you ever lived your life the other way. It’s hard to do for people that are immersed in a detrimental lifestyle, but it’s highly important.

#6 — Become an effective manager of your time

Okay, if you don’t want to quit and you don’t want to feel like you never have the time to do anything in your life, learn how to manage the time that you do have. Do you think the wealthiest people in the world have more time than you? Do you think they have more than 24 hours in a day? Absolutely not. They have the same exact time as every other human being on this planet.

But it’s not about how much time we have; it’s about how we use the precious minutes that exist in our lives. How do you spend your day? Do you spend it helping someone else chase their dreams? Or, do you grab hold of the reigns and push forward as a leader and purveyor of your own life?

You can’t achieve outlandish goals if you can’t manage your time. Find an effective time management system and ensure that you do what it takes to follow through on those goals. You won’t quit if you can institute the right system to ensure that you don’t feel overworked and overburdened all the time.

Okay, so you feel like you’re at the end of your rope. You want to quit and give up because your goals are way harder than you thought they would be. Well, that’s absolute nonsense. Understand that it’s going to be difficult. There’s a reason why so few people achieve their goals. They kid themselves on how simple it’s going to be.

Success leaves clues, like Anthony Robbins has poignantly said repeatedly. Search for those clues. Find others that have achieved the dreams that you’re after. Don’t get sucked into the hype thinking that some system is going to help you hack your goals. It won’t. Dig your heels in and be ready to grind it out and do the work.

It’s okay to feel discouraged and dissuaded at times. You’re only human. But it’s not okay to give up. No matter how slow you go, you have to keep going. That’s how you get there. It’s just one small step at a time. That’s all. Just don’t stop.