“Failure will never overtake me if my determination to succeed is strong enough.” — Og Mandino

One of the hardest things to do in life is to keep pushing past your comfort zone. We all know this to be true. It’s hard to see the forest through the proverbial trees, isn’t it? It’s hard to keep your motivation going when all you want to do is give up. I know this to be true just as much as the next person knows it to be true. So how do you possibly stay motivated when you want to just throw in that towel?

It’s easy to give up when you experience failure. It’s much harder to push through. And there’s a reason for that. It’s because success lies just outside your comfort zone. Success isn’t something that’s easily obtained because you need to be laser-focused for a long time. It doesn’t happen overnight. But we all want things to happen overnight. That’s because it’s part of who we are as human beings.

Ever see that picture where two men are digging for riches? One of them just turned back, and what he didn’t realize was just how close he was to the diamonds. He turns back, completely defeated. Slouched, with his head down, he considers himself a failure. The other guy is fervently digging. He’s close, but not as close as the other that turned back. You see, that’s just it. That’s exactly how success works. It doesn’t come easy. But when you strike gold or diamonds or bitcoins or whatever you want to call it, all that hard work pays off. 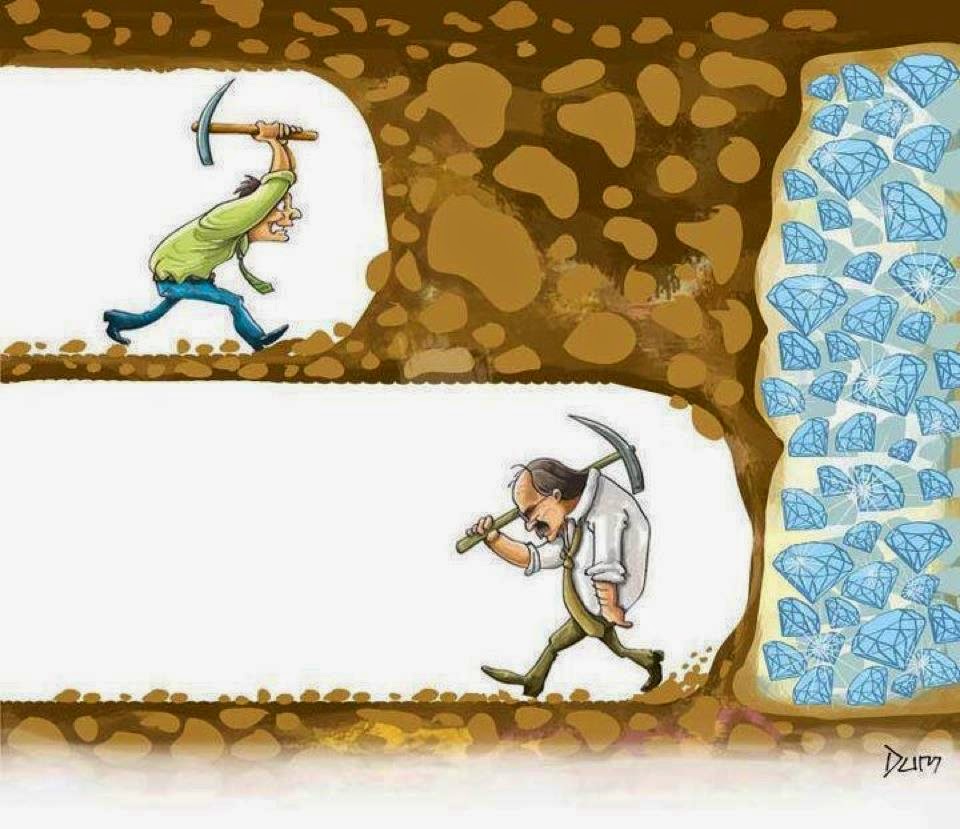 Why It’s So Hard To Stay Motivated

I’ve written about failure a lot in the past. I feel like it’s almost my duty to write about it because it’s so taboo in our society. And you know what? It’s okay to fail. There’s absolutely nothing wrong with it. But there’s a difference between failure and giving up. Sure, you could fail. But when you give up, you throw away all chances of reaching your goals. You head back, like the man in the picture, completely downtrodden.

I suppose that this image and this feeling might seem relevant to you right now. Maybe you’re struggling through something that you’re having difficulty with. Maybe you feel like you’re never going to reach your goal or that you’re never going to achieve your dreams. But the truth is that you can’t feel that way. Not for long anyhow. Why? Because thoughts are things. Whatever you think about and focus on you’ll bring into your field of vision and it will eventually become your reality.

I know that it sounds crazy to most. I still remember years back when I bought my dream car. I remember looking in the sideview mirror almost in shock. But you know what? I had seen that image before. In my mind’s eye, I had experienced that feeling. I had gripped that leather-encased, supplely-stitched steering wheel. I had heard that engine roar in the far-reaches of my mind. It wasn’t new. Sure, the reality of it was. But I had already played that experience over and over again in my mind.

I suppose what I’m trying to say here is that, I get it. It’s hard to stay motivated. When every ounce and fiber inside of you is screaming to give up, when all you want to do is throw in that towel and call it quits, that’s when you have to keep pushing. It’s almost like when you’re working out. Did you know that most of the progress doesn’t happen when you’re working out except for the very last few reps where you feel like you can’t go anymore?

Researchers working on a study at the Australian Institute of Sport in Canberra discovered that weightlifters who were performing four sets of six reps doing bench presses, with that last set done all the way until muscle failure, experienced a 10% increase in their overall strength. However, another group that performed three sets of eight reps doing bench presses, but never trained to failure, experienced only half that with a 5% increase.

Persistence is like the muscle in your mind. You have to train to failure. I know it sounds outlandish and I know that everything inside of you is screaming to give in, but that’s when you have to push even harder. It’s crazy I know. Sometimes, I feel like I’m going crazy working as hard as I do to achieve a goal. But I always think back to this quote that I read, which has played a big role in my life and I always seem to circle back to it.

To me, that’s one of the most powerful motivators. Any time that I want to give up, I just think about that quote. It really resonates with me. I don’t know about you, but just mentally repeating that in my mind invokes some strong emotions and visions. That often occurs when you create a mental incantation and a vision that you really can see clearly, as though it were the reality you were experiencing today.

How To Stay Motivated

There are definitely some ways to stay motivated, even when you want to give up, that far outstrip some others. In total, there are 5 potent strategies for pushing past your comfort zone. Just like the man digging fervently, there are ways you can stay motivated and not give up. Are they easy? Probably not. Are they worth it? Definitely!

Why? Because, when you stay motivated, the world truly is your oyster. You can do and achieve anything. You don’t get sidetracked and dissuaded by things. You push through and you move forward. I’ll show you the exact steps I do to achieve this in the hopes that you can replicate some of the mindset principles I go through to get to where you want to be in life.

This past weekend, I read a book called, Millionaire Success Habits by, Dean Graziosi. Graziosi, who’s sold hundreds of millions of dollars in products both online and through infomercials, understands a thing or two about goal achievement. What I found really profound about his book was a technique that he picked up from a consultant he hired named Joe Stump.

Stump’s reasoning for staying either motivated or committed to something, is to first dive deep into what it is that drives you. Go 7 levels deep. What does that mean? There are often 7 layers that need to be peeled back in order to discuss the true meaning and reasoning for why you want to achieve a certain goal.

I talk about this a lot when discussing goal setting. You need a deep enough reason why you have to succeed. Without it, you’ll likely find yourself giving up. The reason can’t be superficial. It has to be profound. You can read this specific technique in Graziosi’s book (which is free to order if you pay for the shipping) on page 34.

Numerous studies have been done on the effectiveness of writing your goals down. Those who write down their goals and actually create massive action plans, and do this on paper, are more likely to achieve their goals. When they’re written down, they’re real. When they’re only in your mind, they’re simply abstract.

There’s a switch that occurs in your mind when write down your goals. However, before you sit down to set a goal, you should first create a vision. Look backwards as if you’ve already achieved your goals. What does your life look like? Where do you live? Do you have a spouse? Kids? Your own company? What does your house and your car look like?

I’ve been lucky enough recently to find a great mentor. It’s a person succeeding at the highest levels. I feel blessed in fact. And far more motivated to achieve the big and more outlandish goals that I have today. With that in mind, you should definitely find a mentor who can help you along the way.

I never realized the utility of having a mentor who’s already achieved so much in life. I didn’t think it would be as useful as it is. But imagine having someone to bounce your ideas off or to help you navigate the murky waters of building a substantial business. Someone who’s already been there and done that and can advise you on the path you need to take.

I think that it’s incredibly powerful. And if you don’t have a mentor, it’ll surely motivate you enough to where you’ll keep going. Not only is this an accountability partner, but it’s also someone to help along the way. When you get into trouble, it’s also someone who can help you untangle the nasty and convoluted world of business. You must find a mentor if you’re at all serious about staying motivated and eventually succeeding, no matter how long it takes.

I don’t care if you run for an hour or just walk around the block twice in the morning. Whatever you do, do something that will help to get your blood flowing. That’s incredibly important. We tend to forget about everything else when we’re trying so hard to succeed. Everything falls to the wayside.

However, working out is something called a keystone habit. Not only will it keep you motivated, but it will give you mental clarity, physical fitness, emotional fortitude and spiritual centeredness. Yes, it does all of that. And if you’re not working out, you’re doing yourself a disservice.

I can’t even begin to describe all of the benefits you can receive simply by working out. From oxygenating the blood to releasing dopamine, serotonin, oxytocin and endorphins into the body that will naturally keep you operating at optimal levels. You need that when you’re building a business or even working a regular 9-to-5 job. It’s crucial.

In Dean Graziosi’s book, Millionaire Success Habits, he talks about how he takes his children on charity runs to help the less fortunate by donating them a bagged lunch stuff with a hundred dollar bill in each one. That look of sheer excitement on their faces makes it all worthwhile because he made a difference.

He does this so that his children will become more empathetic. He also does it so that they learn not to judge others. Rather, he wants them to contribute without judging. He wants his kids to turn into compassionate humans who forget about all the misconceptions associated with being homeless, poor or even addicted to drugs.

It’s a powerful message and he’s leading by example. It’s also quite motivating to give something to others when you’re feeling down. You don’t need to give money, like Graziosi does. Donate your time. Time is far more valuable than money because we all have the same equal amount of it in life. Rather than squander and throw it away, use it wisely.

When you contribute, you also feel more empowered. Like you’re making a difference. There’s something so very powerful in that. It’s an undeniable motivating factor. If you haven’t tried it, go out there and do it today. Don’t tell anyone you’re doing it. Just do it and watch as the incredible feeling engulfs you.