As a software engineer, I obsess over the details and intricacies of code. I delve deep into the confines of bits and bytes, bending them to my will. In fact, coding has been a part of my life for well over 2 decades now. I have built incredibly complex platforms in the past, erecting them line by line, function by function. I’ve debugged and error tested code for countless hours. Sometimes, it’s driven me a bit mad. But I also know that it’s made me sharper and well-heeled in engineering intelligent code.

I don’t tell you this to brag about my coding skills. I tell you this to provide a framework for how and why the real estate industry is set to change forever thanks to a little company called Kribbz. It’s crazy to think about it right now. I mean, it’s still in its infancy. But it’s funny how a thought can transmute itself into a desire, then into something that takes on a life of its own. That’s Kribbz in a nutshell. It has morphed and grown beyond anything I could have imagined a few years back. And it’s still at the very beginning stages of its existence.

You see, here’s the thing. Industries far and wide have been altered and disrupted thanks to technology. In fact, there are very few industries that have been left unscathed. We’ve seen titans and giants in the retail industry fall at the helm of Amazon, for example. And we’ve bore witness to the collapse of other industries such as transportation, which is buckling at the seams thanks in no part to companies like Uber and Lyft. But that’s not all. Industries are collapsing left and right thanks to the quickening pace of technological advancements.

However, that being said, there is still one industry that is lagging behind them all. And, yes, you guessed it. It is real estate. And we are most certainly set to change that. But as I sit here and talk about it, it’s abundantly clear to me that real estate is not going to go silently into the night. I am sure that there will be push back and we will get punched in the metaphorical face numerous times as we build and scale this behemoth. But before I talk more about that, let me tell you a little bit about the ways that Kribbz is set to change the real estate industry forever,.

What Is Kribbz & How Does It Work?

To explain the concept, I need to give you a bit of background. First, I need to explain how it all came together. Yes, I’ve talked about this in copious amounts on my podcast, Business Secrets by Robert Kanaat. But if you’re not an avid listener, here’s the scoop. Kribbz is the evolution of real estate. No. I seriously mean that. I liken it to Reed Hastings’s founding of Netflix well before streaming internet was a thing. In those days, Hastings figured that technology would catch up. Think back to 1997 and the whole dial-up internet culture.

When Hastings started Netflix, he ultimately envisioned a streaming video service that could deliver flicks in real-time to households around the country. Today, we know that’s a fact. But Hastings and Netflix had to wait 10 years for the technology to catch up. Instead, what they did first was to roll out a DVD-by-mail service without late fees. At the time, it was revolutionary. So much so that they build a cult-like following. Ultimately, they made the pivot. It was hard. But they did it. While I’m not saying that Kribbz will be as big as Netflix (but you never really know at least), what I am saying is that it is clearly before its time.

The ultimate vision was hatched in a room at the Ritz Carleton in Sarasota. The goal? To remove all friction from the real estate transaction. Because, let’s face it, selling a home is a convoluted, costly and highly frustrating process. Yet, most consumers have no other choice. Either they grit and bear it, or try to go it alone in a stark and red-tape-filled world. It’s not easy taking the for-sale-by-owner approach. And without a platform like Kribbz, that’s completely understandable. But we aim to change that by altering the future of all real estate transactions.

Yes, it’s a bold statement. We know that. But just imagine being able to buy and sell a home as simply as you order a package on Amazon. And, to be able to track that sale in real-time with instant alerts. Plus, envision having the immutable and indisputable power of a blockchain working behind the scenes, allowing you to buy or sell in lightning speed. No longer are we talking about months or even weeks to close a real estate transaction. We’re talking days, and potentially, hours to do the same thing. And without paying a dime as a seller.

One of the biggest pain points in real estate are the endless fees the seller has to pay. Did you know that, on average, a seller pays upwards of 16% of the sale price of their home in the U.S.? Yes. I said sixteen percent. On $100,000, that equates to $16,000. Where does it all go? Title, escrow, agents, and an endless array of other places. Roughly 20 families are fed when a home is sold in the U.S. That’s a lot of hands in the cookie jar. But this is not new. It’s been this way for ages now. It’s an antiquated system that generates countless billions of dollars of revenues every single year in ancillary fees. 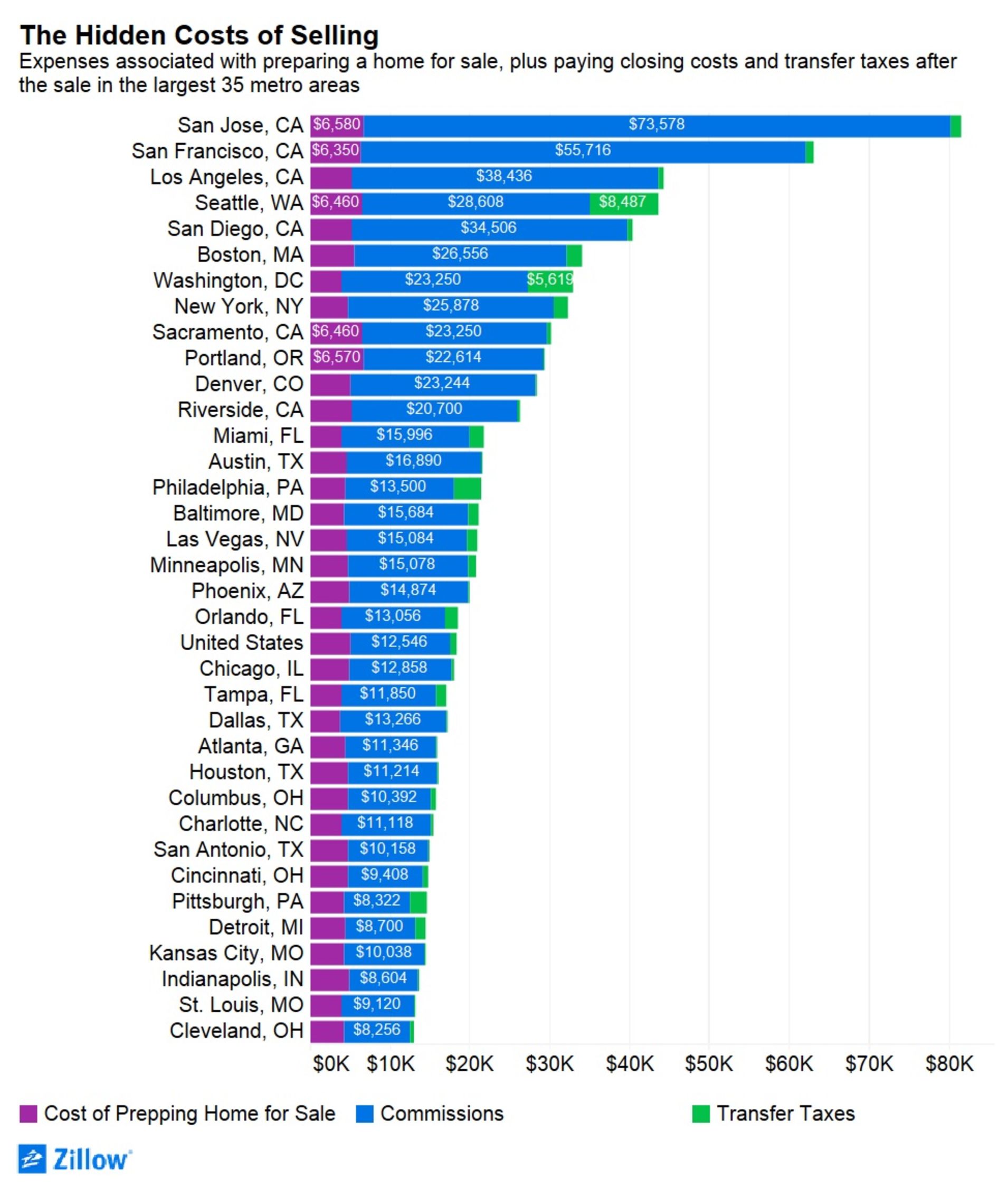 In fact, businesses are founded on the fact that they know, without a shadow of a doubt, that they’re going to pillage and plunder those funds just waiting in escrow. It’s been done that way for ages and ages. And it will continue to operate in that manner unless something drastically changes. Of course, this isn’t something simple or straightforward whatsoever. Industries have been erected over the years that help contribute to a glaring problem that most consumers cannot do anything about.

But just imagine not having to pay a commission to sell your property. Imagine what that would feel like if you were to sell your home for $200,000 and walk away with $200,000. Today, that’s absolutely unheard of. And while there are plenty of iBuyer websites like OfferPad and OpenDoor, those companies actually directly buy your home. They still charge agency fees. Instead, Kribbz offers the advantage of being a marketplace that connects buyers and sellers directly rather than having to deal with messy fees that need to be paid out to multiple parties.

2. Agents will become a thing of the past

Look. I have nothing against agents. Truly, I don’t. In fact, I know agents who are truly awesome human beings. But that doesn’t mean that the entire system isn’t outdated and antiquated. The frustration that most sellers and buyers face happens with agents who don’t do much for their massive commission checks. Sure, some of them go out of their way. But, if you’ve ever been on the side of the coin where an agent lists your home on the MLS (multiple listing service) and sells it without doing much heavy lifting, you get the frustration.

The truth is that we’ve seen plenty of disruptions come in large waves. When Uber was starting out, taxi and limousine companies balked at the ride-sharing service. Today, it has singlehandedly disrupted an entire industry. In fact, it’s been such a problem that there have been major uproars and protests by taxi lobbyists and drivers around the world. This is not to even mention all the lawsuits that have been filed against the company. And in some countries, like Hungary, the taxi drivers managed to lobby the government so hard that they drove the company out.

Now, I’m not saying that agents will become entirely obsolete. Even today, I’m surprised that people still book their travel through travel agents. Certainly, travel agents are still a thing, albeit maybe not something mainstream any longer. Today, booking travel is far simpler on your own and you don’t need to pick up the phone and call anyone to do it. Real estate agents will likely take a similar path. While they won’t be completely obsolete, they will be phased out over time as the market adapts to the new trends in technology.

3. Fractional real-estate purchases will be simplified

Most of us have heard of fractional real estate. But often it’s associated with sleazy time-share peddlers selling vacation weeks off at some resort on some sugary white-sanded beach. However, true fractional real estate still hasn’t become something mainstream as of yet. And there’s a big reason for that. The entire process is highly convoluted and involves overcoming many legal and financial hurdles. Think about it for a moment. How complex is it to purchase a single property on your own? Now, combine that with 9 of your closest friends.

It’s not just about the purchase, but also in conveyance, taxes, upkeep, and other associated costs. Now, what happens when one of the fractional partners are in financial duress and needs to sell their stake? That’s also far from simple. However, imagine doing this securely through the blockchain using a tokenized asset. What if you could easily jump in and buy a property with 9 of your friends (or 9 strangers for that matter) and never have to worry about challenges like that. It might seem far-fetched to you today, but this is the future and it’s certainly coming.

4. County records will have a blockchain alternative

The future is blockchain. It truly is. To date, it is the most revolutionary invention since the internet. Years from now, blockchain, combined with biometrics, will take the place of all other paper-based documentation. It will replace our driver licenses, our passports, our insurance records, currency, medical history, credit reports, and, of course, our property deeds and other real estate investments. It is such a revolutionary technology, yet in its earliest stages as of yet. But just imagine the possibilities this holds for us.

The truth is that today there is a lot of friction involving real estate transactions. Much fo that comes from county recorders’ offices. In fact, there are roughly 3,000 county recorder offices, each with their own requirements for documenting and recording a real estate transaction, and then conveying that parcel of land to the buyer(s). Much of that involves scanning of documents and physical signatures. There is currently no alternative to this. However, if presented with a viable solution, most county recorders’ offices would jump at the chance to fully vet and pilot a real estate blockchain system.

A decade or more ago, who would have dreamt that you would enter into a car with a stranger and drive halfway across town? Yet, that happens millions of times per day around the world now. Or, two decades ago, who would have dreamt that you could stay in a complete stranger’s spare bedroom and conduct a seamless transaction that would all happen online? Today, that happens millions of times every single week. These have led to a sincere disruption of Goliath industries such as transportation and hospitality.

Does that mean that the old giants have gone home easily? Certainly not. There have been protests and riots as a result. However, just imagine if you could find the house that you love and conduct an instant (even cashless) real estate transaction without ever having to worry about the process? Does that sound crazy to you? It might. But does that mean it won’t happen? Certainly not. That’s the future that we’re hurtling towards. There is simply too much friction in a real estate transaction and too many parties involved for this to happen simply today. But it will happen in the near future.